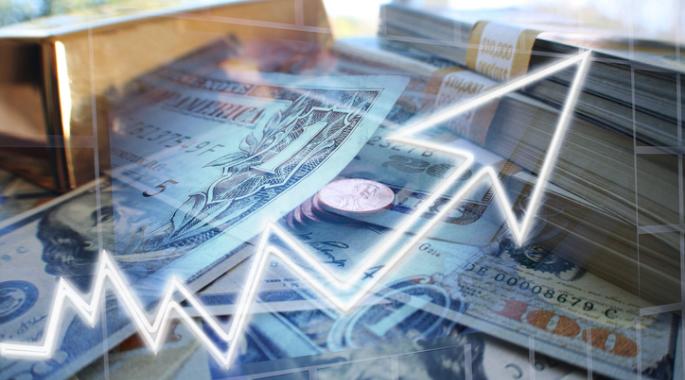 The Consumer Price Index (CPI) skyrocketed once again, increasing 7.1% on a year-over-year basis and 0.5% over the month. The largest increases since November were used cars and trucks, airline fares, apparel, and new vehicles, all up more than 1.0%. Energy prices experienced the largest decrease of the recovery, dropping 0.4% month-over-month and providing much needed relief.

In his confirmation hearing this week, Chair Powell was clear that the Fed is now in tightening mode since the U.S. economy is healthy. His re-appointment, the chances of which appear to be strong, will lend continuity to the Fed’s policy path which will prove important at this critical juncture. Inflation may be at or near peak, but the omicron variant poses increased risks for further supply chain disruptions, which will keep prices high in the near-to-medium term. 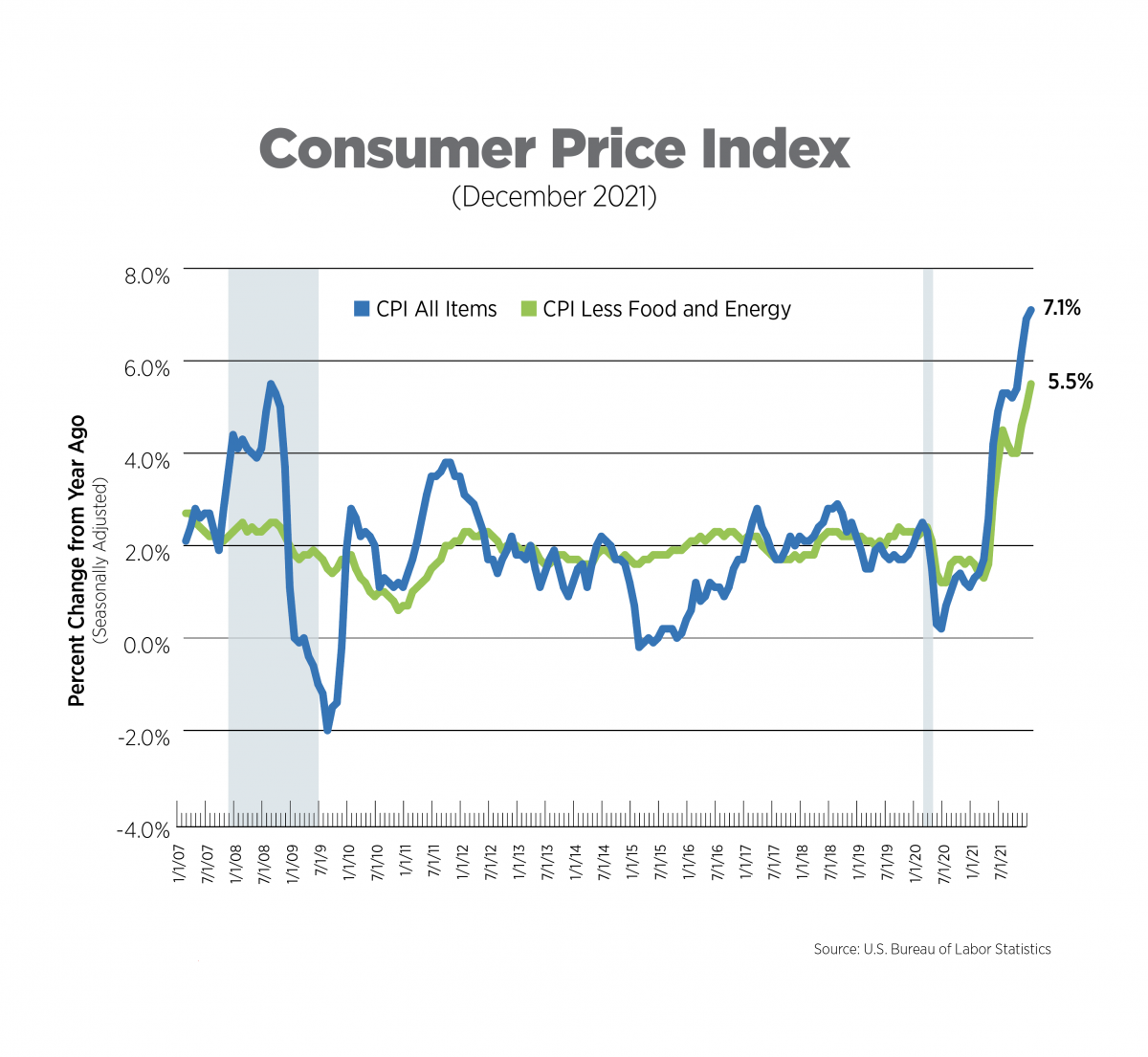 The CPI includes two measures for shelter costs: owners’ equivalent rent and rent of primary residence, both of which are self-reported. Shelter costs as a whole made the headlines this month, but were largely driven by owners’ equivalent rent, which increased 3.8% year-over-year, the highest rate in nearly 15 years.  Rent of primary residence is on the rise, but at 3.3% remains in line with pre-pandemic levels. 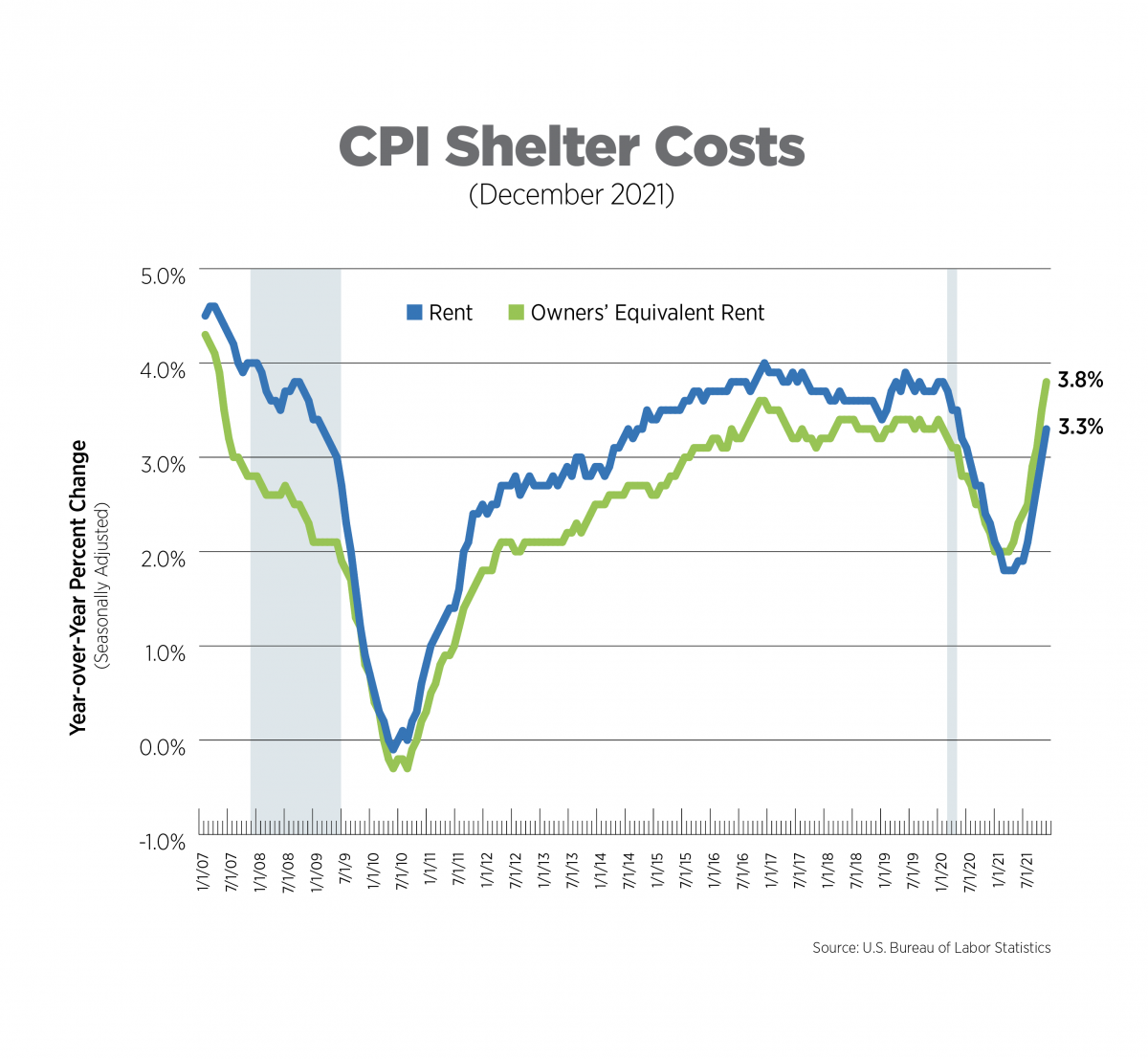 The core PCE increased 4.7%, the highest level since the late 1980s. Durable goods (those with an average useful life of at least 3 years) once again experienced the greatest increases, up 9.7%. The overall PCE increased 5.7%, driven by soaring energy prices which grew 34% year-over-year. Despite the Fed striking the word “transitory” from its most recent meeting, it expects core PCE to decrease to an average of 2.7% in 2022 before returning to more moderate levels closer to the target, 2.3% and 2.1%, in 2023 and 2024, respectively. 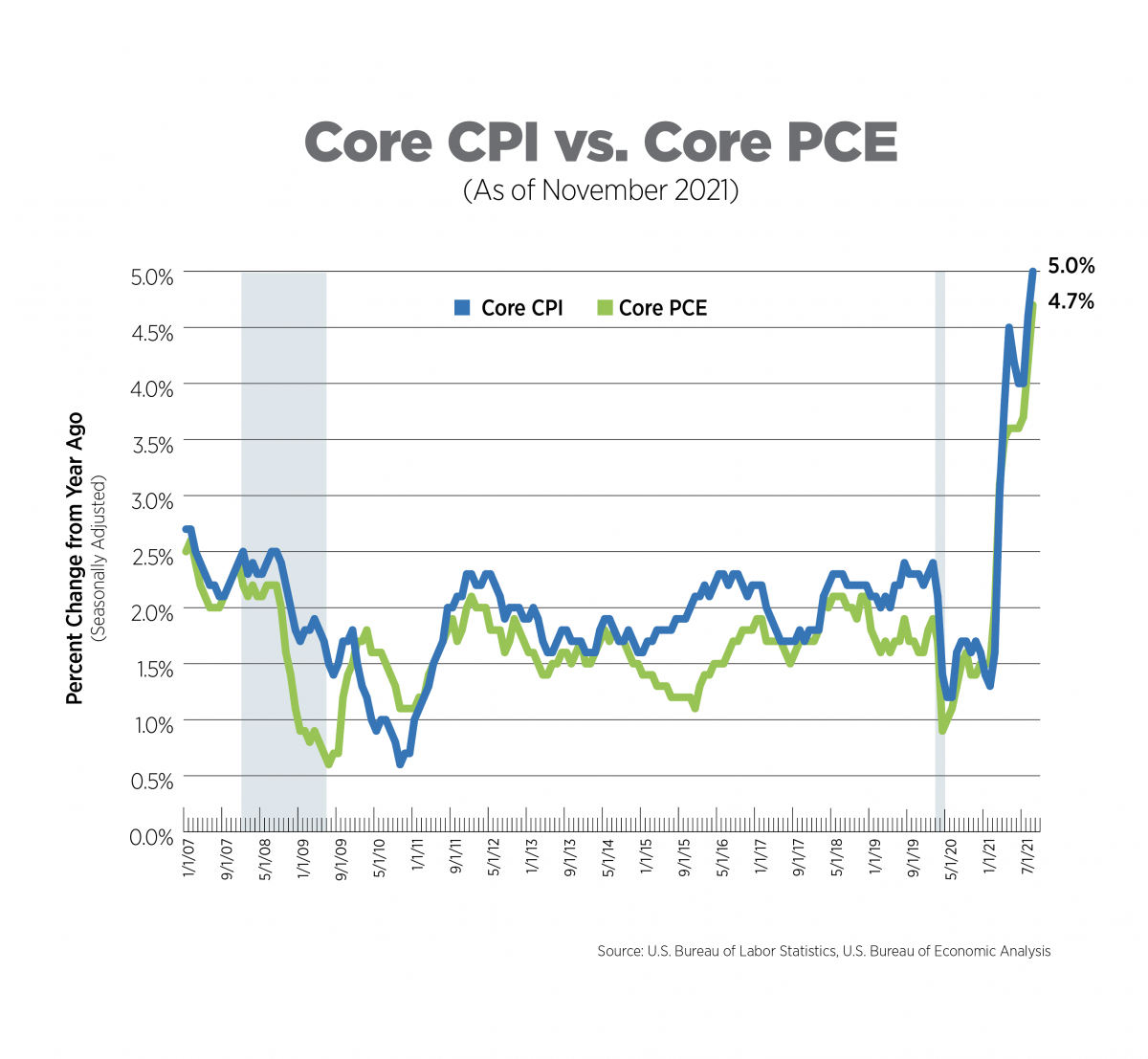 Price increases for goods used in multifamily construction only recently overtook the price growth of services after tracking closely in pre-pandemic times. Service inputs on a construction project include financial, legal, engineering, architectural and transportation, among others. Combined, these services increased 13.6% year-over-year in November.

Construction materials costs, reflected in the goods component of the Producer Price Index for multifamily construction inputs have once again increased by more than 20%. In November, steel mill products were up 142% year-over-year while diesel fuel, aluminum, copper and brass, and plastic construction products experienced price increases in excess of 30%. 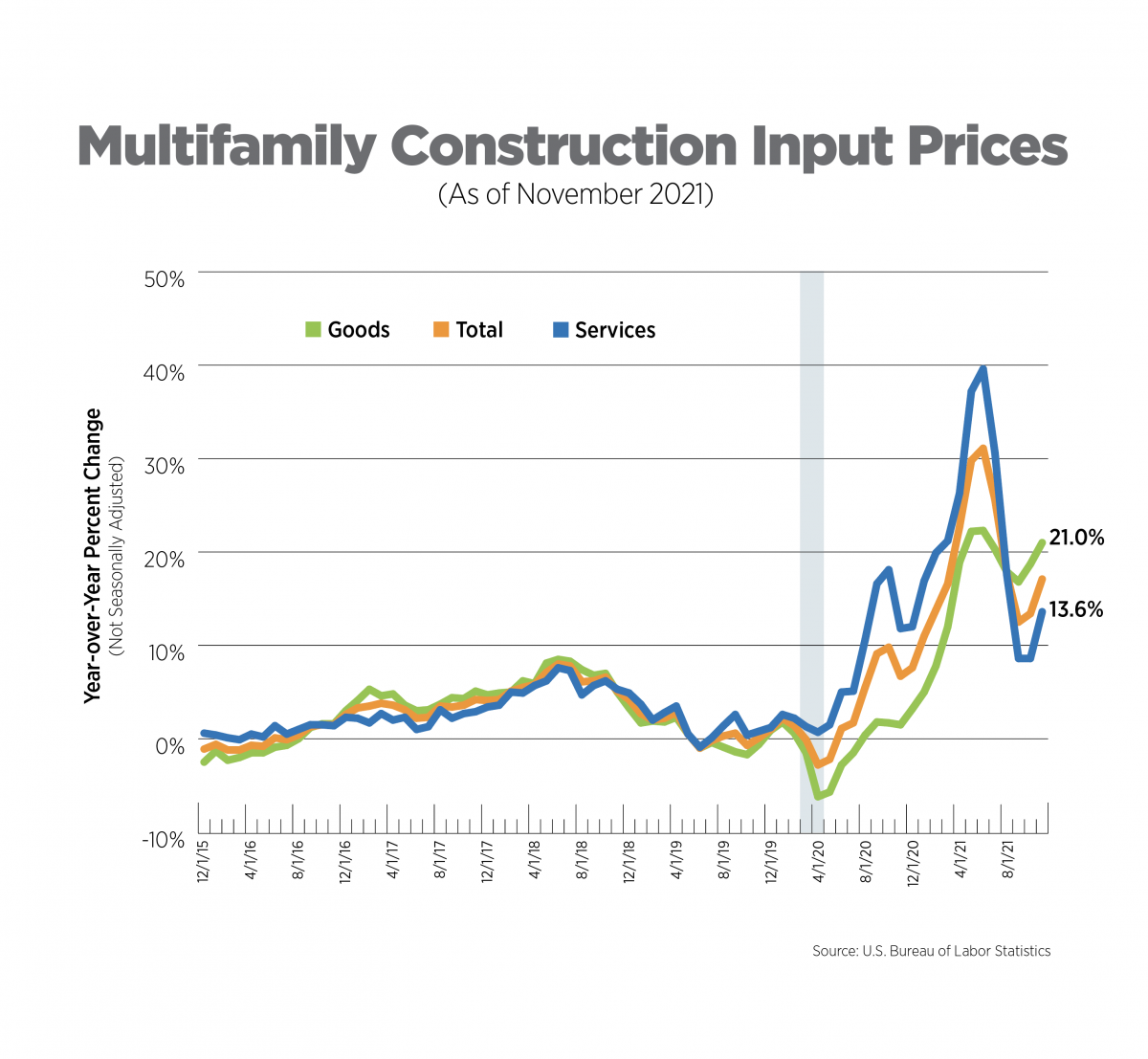 Private sector wage growth, as measured by average hourly earnings, was up 4.7% year-over-year in December.  All industries experienced healthy growth, but leisure and hospitality wages were boosted 14.1%, more than double the second highest sector, professional and business services, which increased 6.2%.  Amid near-record high job openings and quit rates, wages will continue to climb, especially if the omicron variant drives some workers to the sidelines. 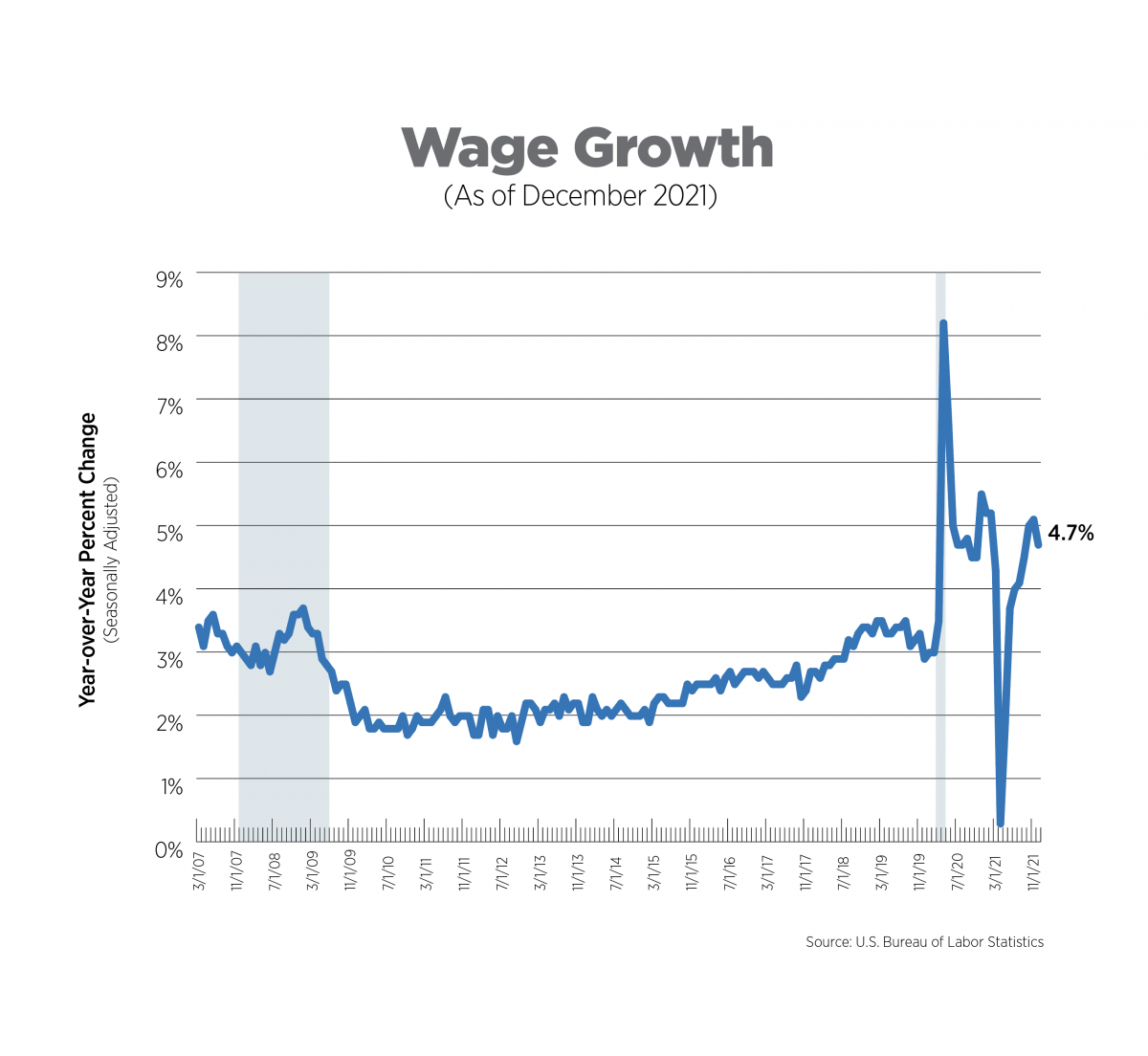 The Employment Cost Index will be released later this month and the Fed will be watching it closely, as risks of a wage-price spiral may have intensified due to the omicron variant.

The Employment Situation Report for January will be released on February 4th and will include impacts of omicron. The December report covered the week of December 12th when much was still unknown about the new variant.